This month the UK celebrates Black History Month. It’s a time to reflect upon the historic contributions of Black people – including leading figures like Garrett Morgan, who made roads safer around the world by inventing the three-colour traffic light, and Dr Mae Jemison, the engineer, physician and former NASA astronaut who was the first Black woman to travel into space.

But we must also use this opportunity to recognise the work that still needs to be done, and to envision a more diverse, equitable and inclusive future. Here, we can learn from Black leaders such as Dr Anne-Marie Imafidon MBE, co-founder of the Stemettes social initiative, which is dedicated to inspiring the next generation of women in STEM, and Dr Nike Folayan MBE, co-founder of the Association for Black and Minority Ethnic Engineers.

Black workers experience discrimination at all stages of employment. But let’s take recruitment as an example, since that’s our area of expertise. Studies show that the odds of a Black candidate receiving a positive response from an employer – for example, being invited to an interview – are less than half of those for an otherwise identical white candidate.[i]

Various hiring biases lie behind statistics like this, including the ‘halo effect’. This essentially means hiring managers may automatically perceive someone in a positive light, just because they possess certain qualities. There’s also the opposite phenomenon, the ‘horn effect’, where hiring managers may attribute negative characteristics to someone based on a particular trait.

Bottom line, Black candidates often do not enjoy the same hiring experience as white candidates. As a result, Black people are under-represented in many sectors – only 9% of UK engineers, for instance, are from the Black ethnic group as a whole.[ii]

So where do we go from here?

Recognising and managing bias is a good start. One solution that many employers are implementing is ‘name-blind’ hiring, where names are excluded from the candidate’s CV – thereby eliminating any conscious or unconscious bias related to non-white-sounding names.

You may also want to open up the conversation among your workforce, perhaps by inviting Black authors or activists to come and speak about race. Because while organizational attempts to be ‘colour blind’ are well-meaning enough, it’s far better to acknowledge and celebrate diversity. After all, diverse teams are proven to outperform less diverse teams.[iii]

Here at Roc Search, we’re passionate about the future of diversity and inclusion in the workplace. Expand your talent horizons through a partnership with Roc Search. 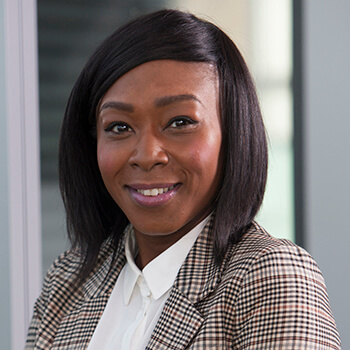